50 years ago in Columbus, Downtown vs. the suburbs

Two bills playing in Columbus in May 1970, downtown vs. the suburbs, murderers vs. gay men. 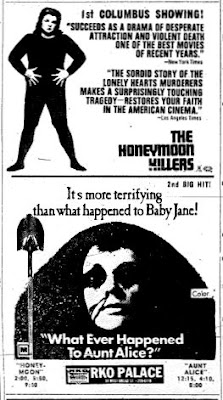 By 1970, the RKO Palace, one of the grand old-fashioned movie palaces, had fallen on hard times what with the number of screens opening in the suburbs. It was now basically a grindhouse (albeit a huge and fancy one) showing horror movies, marital arts thrillers, and blaxploitation flicks. The Honeymoon Killers is actually pretty good, though with a low-budget look and feel. I haven't seen What Ever Happened to Aunt Alice? but it's pushing the "hagsploitation" buttons by comparing itself to What Ever Happened to Baby Jane and featuring two older actresses (Geraldine Page and Ruth Gordon). Page wasn't even 50 yet, but in Hollywood terms, she might as well have been over 70, as Ruth Gordon was.

In the tony suburb of Upper Arlington, The Boys in the Band was playing, I suspect, to fairly specialized groups of gay men. It was one of the first major movies to center on the lives of gay men, albeit sad and stereotyped gay men. Still, it was a breakthrough and if its worldview is no longer relevant, its humor still works and the acting is fine.
Posted by Michael at 1:12 PM No comments:

In mid-May of 1960, the 13th fell on a Friday, back in the heyday of ballyhoo-type programs at theaters aimed at the younger crowd, from kiddies to mid-20s. I was pleased to run across several ads around the country for some Friday the 13th-themed shows.

The above bill from Sacramento featured two second-run films, The Revenge of Frankenstein (1958), which was the second of the Hammer revival Frankensteins (to be followed by at least four more) and the cut-rate monster movie The Giant Claw (1957)

The above 4-movie drive-in bill from Sacramento was not advertised as a Friday the 13th show, but the two films chosen for the ad focus (both 1959 releases which were probably at the end of their first-run engagements) are appropriate: Hammer's The Mummy with Christopher Lee and Peter Cushing, and the sci-fi thiller The Angry Red Planet. The other two movies (Hitchcock's The Man Who Knew Too Much and the Civil War-era melodrama Three Violent People) were four years old at this point 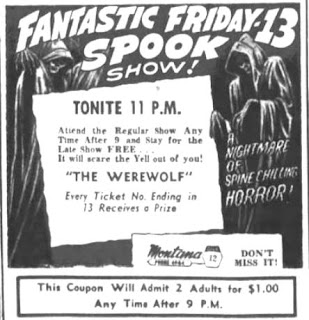 This theater in Butte, Montana was just running one film for their late show, The Werewolf (1956) 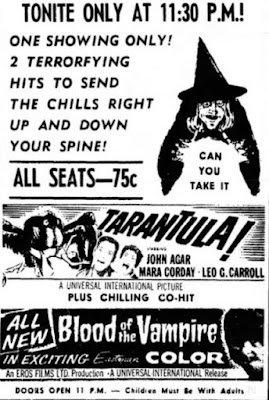 Tarantula (1955) was brought back after five years for a spook show in Sandusky, Ohio, but it's a good one. Blood of the Vampire, despite being called "all new" in the ad, had been in release for a year and a half at this point. Still, if I had a choice of any of the above theaters to visit, it would be the one in Sandusky.

In Reno, the first-run Circus of Horrors would provide the "thrills" and "chills" promised in the ad, while the second feature, The Screaming Skull (1958) might have provided some "laffs" from bored kids.  Below is a color ad for The Giant Claw, promising way more that it could deliver on. 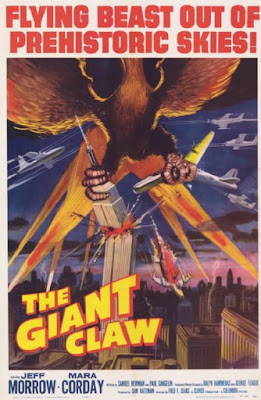 Fifty years ago this week, it's obvious from the movie ads running that the "New" grown-up Hollywood was in full swing. Back then the "X" rating didn't necessarily mean pornography, it meant movies for adults. True, the X was usually applied for sexual material, but the movies weren't explicit in the way we would come to think of X movies just a few years later. All of the following ads are for movies that were playing fifty years ago, on May 1, 1970, though some of these are 1969 movies playing in second-run or at "popular price" houses. Most of the X's here weren't given for one particular scene or image, but for a general tone of decadence or eroticism. 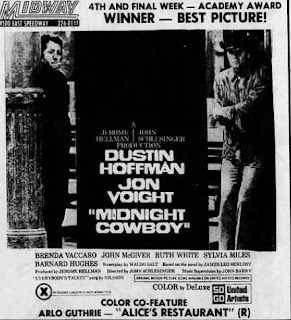 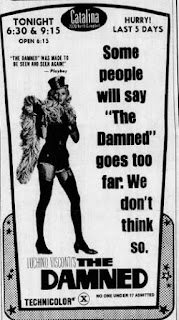 The Damned (also a Tucson ad) has Nazis, Helmut Berger in drag, and Third Reich moral rot. It was later shown on late-night network television; though heavily trimmed, it still caused controversy. It was nominated for an Oscar for best screenplay. 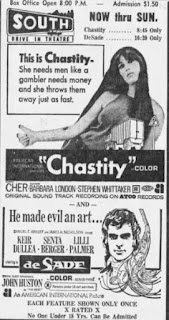 From Columbus, De Sade, billed with the R-rated Chastity, was actually a pretty artsy movie which tip-toed around Sade's actual life and works. Still, the title was probably enough to freak out the ratings board. It's very stagy, and Dullea does not suggest Sade in the least. The second ad is from its New York opening in the fall of '69 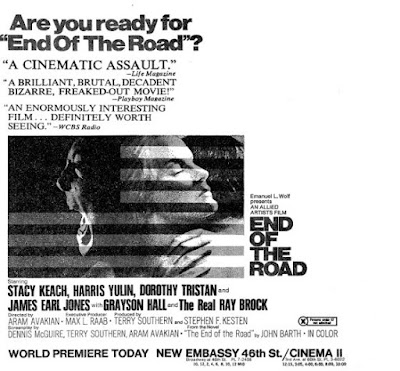 End of the Road, based on a book by John Barth, is about a disturbed academic, and the rating here seems to be due to an abortion scene. It's an interesting and intense movie but does not invite repeat viewings. It was given a wider release on New York in May, but the ad below is from its initial run in February.
Posted by Michael at 10:03 AM No comments:

Yes, Easter was a week ago, but I just got around to looking for ads for the silent Cecil DeMille classic King of Kings which I watched Easter morning. As with many ads of the silent era, these are word-heavy advertisements with limited use of images, though the ads typically became less wordy as the movies spread from the East and West coasts inward. 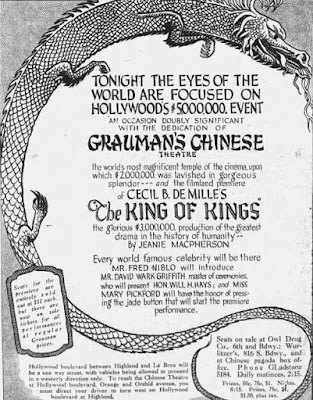 This ad from the Los Angeles Times (5/18/27) is for the Hollywood premiere of King of Kings, and also for the opening of the legendary Grauman's Chinese Theatre, with D.W. Griffith and Mary Pickford in attendance. 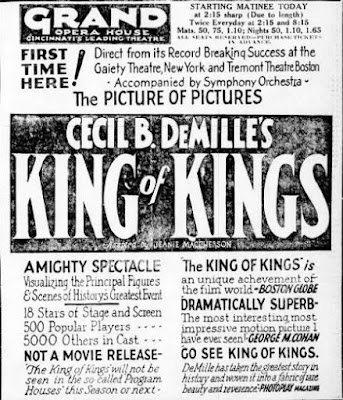 In Cincinnati, the film opened in October of '27 accompanied by a live orchestra, and being heralded as "not a movie release," i.e., not likely to show up in the smaller neighborhood movie houses anytime soon, all the more reason to head downtown for it. 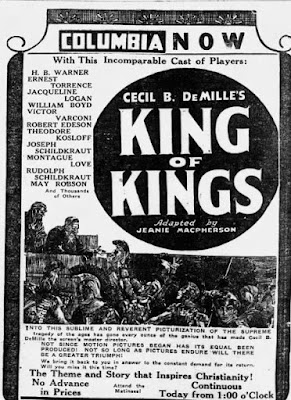 A year later, it shows up in Phoenix, Arizona, with some photos this time. This was most likely the shorter version which DeMille prepared for wide release, 30 minutes shorter than the big city version.
Posted by Michael at 12:32 PM No comments:

50 years ago this week (first weekend of April, 1970) in Oklahoma City, this ad with an interesting hook ran: These movies have been held over (presumably by what they used to call "popular demand") so they must be good! 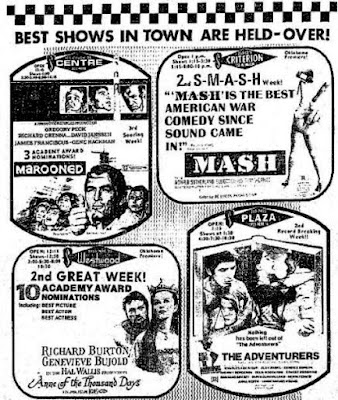 Of the four, only MASH was a critical and commercial hit. Anne of the Thousand Days was a prestige hit, up for 10 Oscars (winning one) and winning several Golden Globes including best drama, but it was not a big box office draw. Marooned took in a fair amount of money but doesn't appear to have made back its production cost. The Adventurers, the only one of these I haven't seen, was a huge stink bomb. None of the others are particular favorites of mine--I didn't see the MASH movie until a few years after the MASH TV series premiered, and to me, the movie suffered.
Posted by Michael at 5:11 PM No comments:

As the coronavirus continues and the country is on lockdown, I'm feeling more nostalgic than ever--and I usually feel pretty nostalgic. So I'm going to try and make one post a day: some of random movie ads, some of pop culture artifacts that mean something to me, photos from movies I've been watching at home, and anything else that helps me escape the current apocalyptic situation, which is so far both frightening (everything closed, jobs lost) and boring (no shuffling zombies in the streets yet). I will undoubtedly post several flashbacks to the summer of 1969 when I discovered top 40 radio. More about those circumstances in later posts. But first, a record from a little earlier. 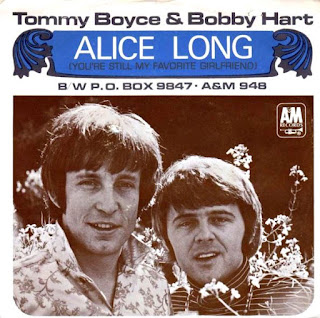 We were visiting my grandmother in Cleveland in the summer of 1968 and one afternoon, I stumbled on what must have been an episode of American Bandstand which featured Tommy Boyce and Bobby Hart performing "Alice Long (You're Still My Favorite Girlfriend)," a song which I discovered later was a follow-up to their previous top 10 hit "I Wonder What She's Doing Tonight." The two songs sound similar but at the time (I was 11 and wasn't into much music beyond the Beatles and the Monkees) I had never heard "Tonight." But I loved "Alice Long," and when I got back to Columbus, I bought the single. I'm pretty sure it's the first 45 I bought that had a picture sleeve. I don't have much else to say about it--when I mentioned it in a blog post here back in 2010, I said it was "wonderful bubbly 60s bubblegum" and any listener who had heard "Tonight" first would probably prefer that song. But Alice will always have a place in my bubblegum heart. The video below looks to  have been stretched for widescreen presentation, but the song is intact.

I don't know for sure when the motorcycle gang movie genre peaked, but they still seemed hot in 1970. Fifty years ago this week, a triple bill of cycle movies was playing at the Cactus Drive-In in Tucson, Arizona, though all three were second- or third-run movies. 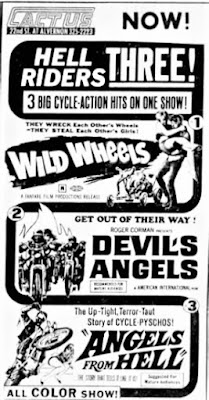 Wild Wheels (1969) was cycles vs. dune buggies and featured Casey Kasem, though it seems to be a lost movie now. 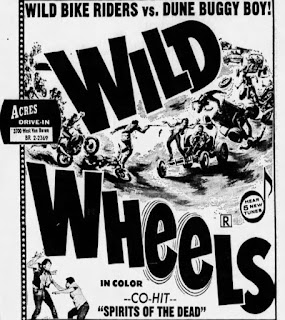 Devil's Angels (1967) was produced by Roger Corman and starred John Cassavettes just before he began directing his string of indie films that would make him a 70s cult figure. 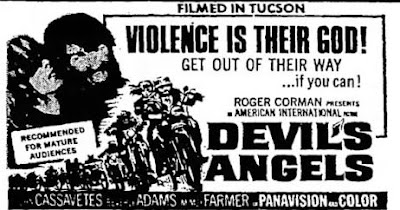 Angels from Hell (1968) appears to combine cycles, a Vietnam vet, and police brutality. 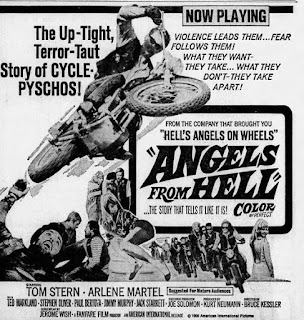 I will try to revive my moribund blog by focusing on mementos and artifacts (ads and photos) of movies, books and music that have been important to me, with a few brief words on why. I have been posting movie ads from newspapers in a Facebook group, which gave me the idea for doing the same here, with added personal commentary. Most of the ads will from come papers in Tucson AZ or Columbus OH, where I spent my formative years, though I will also posts ads and other artifacts from other sources. I reserve the right to post occasional reviews of current media if I feel compelled to.